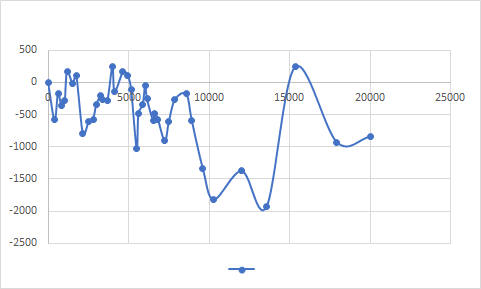 #2
I played more blackjack and video poker more so than anyone (on the kitchen table with authentic shuffles the same shuffles you would encounter at the casinos) with that being said i too experienced losing streaks that lead my bankroll to a minus -6k and -8k can it happen from the threshold? You bet your ass it can i usually lose intrest at that point and Zenking prattles on how he lost 300+ at the tables of blackjack. Those 2 stats tell me i should not try with a tiny roll (3k$ is alot to me) id probably feel different if i produced the income of a banker or lawyer but i digress and decide to play vp
I think its more possible to win 8 grand in 1 sitting on 9 6 Job machine i read more success stories and played with more success on vp than bj
B

#3
sidthesquid said:
I think its more possible to win 8 grand in 1 sitting on 9 6 Job machine i read more success stories and played with more success on vp than bj
Click to expand...
Starting at 3k! Sorry, you are in for a rude awakening. Save your money. You are not going to change a negative expectation into a winning proposition. Nine six Job, a really bad idea.
S

#4
Yea? How much money did you win from bj? More than Zen or kewl? Or Sonny? How much did you lose? More than Joel? Billythebjkid or Jimtech? Come back with the truth Mr bj xpert!
B

#8
You damn right i am and my simulations correspond to there results again even if i am a tiny bit successsful i cant see myself making a career unless i live in vegas or mobile i am sure the champions in the past lost due to variance and bankroll complications which would be my first fate if not the 2nd fate of backing off.

#9
sidthesquid said:
Come back with the truth Mr bj xpert!
Click to expand...
BoSox said:
Starting at 3k! Sorry, you are in for a rude awakening. Save your money. You are not going to change a negative expectation into a winning proposition. Nine six Job, a really bad idea.
Click to expand...
I was telling you the truth! You should be thankful.

#10
Doing everything right and still losing is just frustrating.
B

#11
sidthesquid said:
I think Kewl said he won 10 bucks after 100hr of counting that pretty much sums it all up what can and cant happen at the tables
Click to expand...
Absolutely! What you think it is easy, that everything works positively because it supposed to. Variance gets in the way, and it will smack you in the face just when you are not expecting it. So you better be prepared and get used to it.

#12
If your ROR is zero or near zero, why worry? If it's well above zero, then go ahead.

#13
sidthesquid said:
I think Kewl said he won 10 bucks after 100hr of counting that pretty much sums it all up what can and cant happen at the tables
Click to expand...
Oh joy...Sidthesquid, who attacked me for 2 solid years at Wizard's site when I wasn't even a member of the site and could not respond has joined and will now grace us with his wisdom.

Ok, so I have no idea what you are referring to above, but yes, I am sure I have had quite a number of 100-hour periods were results were in the red (less than $10). I am sure if I go back and look, I can find several 100-hr periods where I am down 10k or more. That is quite normal. I have actually have had 5 different 5-6 month periods where I made no money. These periods consisted of an initial big loss of 10's of thousands of dollars over a few weeks or month and slow recovery back to the point that you are even some 5-6 months later. Again, that is blackjack variance.

NOW, since I finally have the chance to answer some of your charges after several years of you bashing me on a site where I could not respond....what is your deal sidthesquid? You have made references back to this site, before it's re-incarnation, what 7 years ago now. Care to share what handle you were back then, so I know who I am dealing with?

Second thing, just like I told ZenKing...I NEVER....never, never, never told you or ZK, or anyone to quit a job, move to Vegas and / or pursue card counting. I have simply shared my experiences, including some pretty rough going early on and even at different times recently, like 2014 when my blackjack total win was $27,000 vs expected value of $87,000. That is blackjack! It's not all fun and game. There is variance involved big time and at times Variance will kick your ass....short term. BUT this is a long-term game.

So stop blaming me for whatever your blackjack experience has been (sounds like NOT what you expected). I never encouraged you or anybody to pursue anything! And I certainly am not to blame for things not going as you hoped or expected.

edit: Oh and one more thing: BillytheBJkid? Really? You have referenced BillytheBJkid several times at WoV and now do so again here in your first day. So the question: are you BillytheBJkid? I mean it actually rhythms with Sidthesquid?
Last edited: Feb 25, 2018
B

#14
JohnCrover said:
20,001 hands played and -840.5. How can anyone do this for a living?
Click to expand...
John, I may have missed this from another thread if you did write about it. Out of curiosity what type of games, and rules are you playing against? What spreads are you using, do you play all hands, the CC system you use, any deviations? What is your game plan?

Is this dollars or some sort of unit? If it is dollars we would need to know what level stakes you are playing. Down 800 or 1100 dollars to someone playing midlevel green to black would be very different than down that amount to someone spreading 1-8 red.

#17
Meistro said:
He's playing the trainer.
Click to expand...
Oh. Then I don't get the "How can anyone do this for a living" comment. Who is making a living off the trainer?

#19
KewlJ said:
Oh. Then I don't get the "How can anyone do this for a living" comment. Who is making a living off the trainer?
Click to expand...
I don't really know how to respond. I know it's just a trainer but I'm using it as a simulation to replicate real life results. I don't try to think of the results in terms of dollars, more as in units. The only reason I'm playing with the betting level I am is because you can only start with $1,000 on the trainer and bigger pet spreads would be problematic in case you had to double or split a few times.
I'm just frustrated with the results I have been getting from the trainer. I'm not one to put on a tin foil hat or anything but I suspect foul play.
M

#20
I would guess I win about 80% of the time when I play with the strategy trainer on his site. However, I play a much more aggressive game with the trainer than in a real casino. I play the double deck game.
You must log in or register to reply here.
Share: Facebook Twitter Reddit Pinterest Tumblr WhatsApp Email Link
Top