#1
Why in the hell wasn't Stalker included? zg 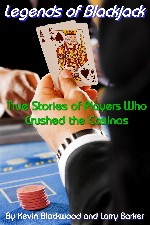 Kevin Blackwood and Larry Barker are the co-authors of the new book, "Legends of Blackjack – True Stories of Players Who Crushed the Casinos". For more details about the book, click here.

Shortly after I (Kevin Blackwood) finished writing Play Blackjack Like the Pros (HarperCollins, 2005), I became intrigued with compiling some true stories about the legends of the game.

The impetus for this new project was Ben Mezrich’s runaway bestseller Bringing Down the House. While I found that book well written and the exploits of the MIT team captivating, I was disappointed in how the author strained the boundaries of the non-fiction genre. Consequently, I decided to put together a book that did not embellish the accounts of the greatest blackjack players, but instead presented them in a truthful and factual manner.

My original plan was to write the entire book about just one group—the infamous Czech blackjack team who pounded casinos all over the world. I was fortunate enough to have known these innovative players well, and I felt they had an incredible story to tell.

However, initially they weren’t crazy about my idea. They remembered the ill will caused by Ken Uston shamelessly promoting himself back in the 1980s; and the Czechs did not want to alienate other blackjack players by tooting their own horn. Finally we reached a compromise and decided to make it a book consisting of short stories about many different people that have greatly influenced the history of blackjack.

This shift actually provided a great new dynamic for the book as I was amazed by how many intriguing stories were out there, such as Frank Salerno ingeniously coming up with the Big Player concept, and a colorful account about Stanford Wong’s first trip to Reno to test his card counting skills (he won so many silver dollars that he almost needed a wheel barrow to take them to the cashiers cage).

The criteria I used for determining the "Legends" to be included in the book was admittedly very subjective. I gravitated to the people who either influenced the game greatly (innovators like Dr. Ed Thorp), or who were big winners at the tables (such as Tommy Hyland or the MIT team). However, I am sure there are many other deserving people who could have been included in the book. Some stayed under the radar and their exploits were never known. A few "Legends" declined to be interviewed, while others did not play in the "Golden" early era of blackjack that is the primary time frame of the book.

Although I started on this project several years ago, severe back problems prevented me from finishing the book. Fortunately, I was able to talk Dr. Larry Barker (an accomplished author and highly successful tournament blackjack player) to help me complete the Legends of Blackjack. Larry interviewed some of blackjack’s most important players and pioneers and I will let him talk about the interview process in writing the book.

"When Kevin approached me about helping him complete his Legends project, I was both honored and excited. I had worked as technical editor on Kevin’s Casino Gambling for Dummies book (Wiley, 2006), and we developed a good working relationship. In addition, we had the opportunity to get to know each other on a personal level at several major blackjack tournaments.

When I entered the project, Kevin had already completed over half of the book, and had secured agreements for interviews with a number of blackjack "Legends." He introduced me via phone or email to a number of the famous blackjack icons and I developed relationships by phone or face-to-face with them. My procedure was to use a set of standardized questions, sent to the Legends in advance; and to record their responses via telephone on tape.

In some cases, I met with them in person, and took additional notes during and after these meetings. In one case, I flew from my home in Florida to California to meet with Keith Taft and his family. That meeting was a memorable one, and one that I’ll never forget. Other face-to-face meetings, including ones with Stanford Wong and Steve Einbinder, took place in Las Vegas, when I was there playing blackjack tournaments.

Each interview by phone lasted from one to two hours. Tammie Brown (2008 million dollar winner of the Winstar Blackjack Tournament) agreed to transcribe the tapes. After she provided the transcriptions, I crafted the chapters from those notes.

The final stage of the project involved integrating my segments and chapters with those that Kevin had already completed. Lots of editing and emails between us followed, and the book took final shape. Henry Tamburin and his staff transposed the manuscript into an e-book, and the Legend was born."

Staff member
#3
I got an advance review copy, and found this book to be an excellent read. That's not surprising given the excellent team of Kevin Blackwood (BlackjackTournaments.com User KevinBlackwood) and Larry Barker (BJT User DrBass).

I was familiar with some of the people profiled, but in every case I learned something new about them. In a few cases, I recognized the name and remembered meeting someone, but didn't know the story behind the name until reading it here. In one case, I read almost an entire chapter before realizing the subject was a very friendly fellow that I sat next to at a Blackjack Ball a few years back!