Can you teach yourself blackjack and win?

We all come to the tables by different paths. While I’m not a hardcore blackjack player, I do enjoy the game and usually dedicate about 20% of my bankroll to it. I’ll try to lay out some of the pitfalls I faced in learning and coming to love the game. Beginning or novice players might save themselves some grief, not to mention money, and experienced players might get a laugh out of my foolishness. 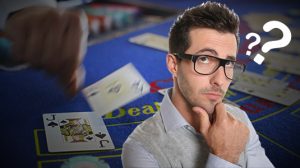 I started playing Twenty-One for fun as a kid. Blackjack and poker were family games in my house. My dad or mom would drag out the penny jar on a Saturday night, divvy up, and away we’d go. Of course, I wouldn’t suggest that to anyone else and I didn’t do the same with my children, but those were different times.

We played by old Las Vegas-style single deck rules except that the winner of the last hand became the dealer for the next. It didn’t take long to realize, that no matter how well I played, I wanted the deck as often as possible to be the last one standing at the end of the game.

While I learned the basics simply by playing, I didn’t know about optimal strategies until much later. I also had my own method of counting, which I learned later at some expense was deeply flawed. But I didn’t learn that until I started to play blackjack online.

You see, in our game when the dealer won they got to deal the next hand, but all cards that had been played were burned under the deck until there weren’t any fresh cards left. It’s easy to see how I was able to keep track of important cards and occasionally beat my older, smarter family members.

Being an eager kid who wanted the deck at any cost, I also developed a bad habit of playing hunches without supporting data and even doing things I’d never do now like splitting Tens or doubling an nine-count without regard to the dealer’s hand.

My first shellackings came at the man camps in Wyoming when I was working in the oil fields. We were basically locked down at a remote outpost for 6 sixteen-hour days in a row with one day off a week for 3 weeks and then cut loose every fourth week. I played a lot in the rooms and lost more than I care to remember. But that was nothing compared to the trips to the Jolly Roger once a month. The Inn is once again a respectable and safe family dining venue, but in the late 1970’s it was was a madhouse with drunken roughnecks itching for a fight, working girls, unmentionables, frequent brawls, people being thrown out windows, and of course plenty of blackjack and poker with fistfuls of twenties and hundreds changing hands over and over. It was nothing like playing from the comfort of home as a kid or online now.

Needless to say, with my ‘play by the gut’ methods, half-baked strategy, and poor card counting with the deck being shuffled between hands, this fool was soon parted from his money more than once.

The last time I played before sitting down and taking the time to know what was really going on with the game was when I was working on a fence crew in the Nevada desert. We spent the weekends at a border town hotel-casino and you can probably guess how much money I came home with when the job was over. I guess I learned the hard way. After all, there were no online blackjack schools back then.

I learned to play and appreciate the game after a few years playing online, mostly slots and tables. I kept seeing reference to strategy cards and had become friends on some forums with a few top-notch players who mostly played in land casinos for high stakes. I worked them for all the info I could get out of them. I copied a few strategy cards by hand to try to internalize the information faster and started playing some practice games. After I found a site that let me lower my bets to a dollar I took the plunge and started refining my game.

The rest is history, as they say. Now I can hold my own and I win as often as not, plus I get a lot of playtime from a small deposit. While I’ll never hold a candle to players like Ken Smith that’s okay, I only need to beat the dealer.

My thoughts on playing online

As far as advantage play, I don’t lend much credence to card counting for online animated RNG play. It simply seems like too much work for me to imagine counting a six-deck shoe that is reshuffled after every round. The margins are too small and the sample sizes far too large for my taste. It might be a fun hobby when I’m retired. 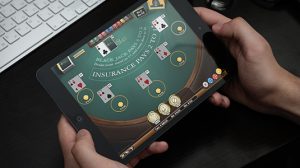 I tend to look for a single deck game online with decent rules. 3:2, double any two, split Aces at a minimum. I haven’t found one yet with those rules plus dealer stick on soft 17. While there are still a few 3:2 single deck games out there, most of them have fairly high minimum bets. Some providers shift the rules a bit to double on 10 or 11 only. You have to give up something and it’s rare to double on nine. I’ll still play that game. Once those rules are known I look for more than one seat.

I won’t go into the maths, but suffice to say, if I can bet on three or more hands the second hand will be bet heavier than the first and each hand in line from right to left will have a significantly increased chance of winning because I’ve seen at least seven cards (2+2+2+D) before I make the first decision. If the hands closest to the dealer end up with several splits or hits, I’ve seen quite a few cards before I make a decision on the 3rd, 4th, or 5th hand.

There is a range of possibility for each hand, and I will eventually get around to factoring that for the amount to bet at each seat. For now, I simply bet “more”, usually doubling the wager on each hand.

Lars is a long serving editor for the LCB network with over 7 years of experience in the gaming industry. Making contributions to multiple sites, his ability to research and report on gaming industry news makes him a vital contributor to blackjackinfo.com.

Well written, but you display either an extremely limited knowledge of how card counting works or are deliberately attempting to mislead less knowledgeable players. I noticed that you mention playing online several times and provided a direct link to one particular online casino.

It’s true that, with index play, you have more information available for playing the 2nd hand and beyond. However the benefit of the extra information is not even close to enough to overcome the house edge, and you certainly should not be doubling your bet on each subsequent hand. This is a recipe for disaster.

Hi Gronbog, thanks for the kind words and critique. My purpose wasn’t to teach counting, simply to relate a self-taught system fraught with errors and the inevitable results. All I did back then was count Ten cards and Aces so I had a feel for how many were left – like using 1/3 of the simplest possible strategy and I didn’t assign a value to the Tens or any other cards. I think it was a case of knowing just enough to get in trouble. It worked okay as long as the deck got smaller with every deal, not so much when reshuffled between hands. Sorry I wasn’t more clear.

3-5 seats playing single deck: Well, maybe you’ve given me that little prod I needed to do the maths to determine EV for hands 1 through 5 playing single deck. With those numbers, I’ll be able to establish a range of optimal bet increase for each hand, based on known cards.

I can see I wasn’t super clear on “I simply bet ‘more’, usually doubling the wager on each hand.” There is no potential disaster in betting $10 on #1, $20 on #2, $40 on #3, etc.
Agreed, those numbers aren’t in line with the odds, of course, each successive seat isn’t x2 as likely to win as the last, but as long as the highest bet is within bankroll limits there’s no harm – Not optimal to be sure, but it’s never brought me ruin. Anything you can do to chip away at the HE is a good thing!

Well Gronbog, it turns out that any benefit in betting more with each seat is very slight. Hardly worth doing the maths. Thanks for your comments!

I encourage you to do the math. A simulation is actually what is required. You will find that none of the spots you are betting on will ever have a positive edge, even if you were to apply full indices while playing. So the optimal bet for each is zero. Having a less negative edge on each successive spot is not a reason to increase your bet.

If the principle of your strategy was sound, then you would be better off finding a full table and simply flat betting the last spot. Your would have the maximum amount of information available to you and would never have to bet on a spot with a negative edge. This is, of course, not a valid approach. If it were, we would all be literally fighting one another for that last spot.

With respect to the potential disaster of doubling your bet on each spot, going from $10 to potentially $640 on the final spot, the harm is that will, over time, lose the house edge multiplied by the total of your bets. Betting more on the later spots will only increase the rate at which this will happen. It’s not clear what you mean by “brought to ruin”. For most, it means having lost enough that you quit playing for good. Perhaps you have a large bankroll, or perhaps you replenish it from another source, such as a job. If you have been playing for as long as you imply however, then it is extremely unlikely that you’re in the black.

Perhaps I’m still missing the point of your blog post. I’m hoping that the next post will say that this was one of your biggest early mistakes. But it feels like you’re leading up to a claim that this is a winning, long term strategy.