Blackjack Tournaments, whether played online or at land-based casinos, offer one of the best values in the gambling world. Since tournament players are competing against each other instead of against the casino, a smart player can get a big edge by learning to play better than the average gambler. 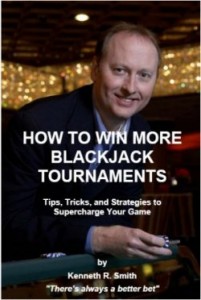 Ken has written an E-book that contains a wealth of information about tournaments, and powerful tips and strategies for competing.

Available for immediate download at a price of $14.95, How to Win More Blackjack Tournaments – Volume I is a professionally produced 98 pages of information that will supercharge your game.

This E-book contains everything you need to take your tournament game to the next level. With material for every skill level, and many concepts that have never before appeared in print, this is a must-read if you are serious about blackjack tournaments.

The 98-page PDF book is available for immediate download after purchase.

A second book is now available as well: How to Win Even More Blackjack Tournaments – Volume II, also at $14.95. Or, you can get a specially priced bundle of both E-books for $24.95.

Much More Available at BlackjackTournaments.com

Our sister site BlackjackTournaments.com is the definitive spot for discussion of table game tournaments and tournament strategy. Many of the best players in the world participate on the active message board there. There is also a free listing of upcoming blackjack tournaments all around the country, with literally thousands of events listed. It is a goldmine of tournament information.

Ken Smith has been competing in and writing about blackjack tournaments since 1994. Like many avid tournament players, he had a lot of early success, winning a considerable amount of money in events in his first year competing. Ken lives in South Mississippi near the Gulf Coast, where the casino industry was still brand-new in the mid-90’s. At that time, the Mississippi casinos were competing for business and there were weekly blackjack tournaments literally every night of the week at the various casinos. In the weekly events, players could pay a $50 entry fee and compete for $10,000 in prize money. Larger events were held several times a year.

Since tournaments were new to the area, many of the players were unfamiliar with the appropriate strategies and were at a significant disadvantage to the sharper players. Week after week, the same names appeared at the final table, and Ken was among them. He played often, learned a lot, and made a nice supplemental income.

Ken’s appearances on televised blackjack tournaments include all four seasons of the World Series of Blackjack on GSN, the Ultimate Blackjack Tour on CBS, and the Las Vegas Hilton Million Dollar Blackjack Tournament on the Travel Channel.

I had a player double down on an ace/king in a tournament. He was a regular and knew the dealer. I lost because of that. Is that allowed

Most tournaments do allow doubling on blackjack, although some don’t. It can be a useful move, when winning 1.5 times your bet is not enough to accomplish your goal, but winning 2 times your bet is.

Ken, I greatly appreciate your insight. Tournament question: 20 hands, 5 players, top 2 advance. Starting bankroll 25k. Minimum bet 500. Quarterfinal round. I had a horrible run, losing 14 of the first 16 hands, plus a double down and both ends of a split. The best hand I had / made was 17. Anyway, On the 17th hand, I was down 9500. The other 4 players had over 30k each, so I went all in, received a 15 vs 9 and busted. Looking back, I’m wondering if going all in was the proper play, considering that things get crazy on the last few hands, and maybe I could’ve waited until the last 3 hands to make a move. The top 2 were advancing, so now I’m second guessing myself as to whether I could have snuck in there under the wire on the last hand. Did I make the right play? Your feedback would be greatly appreciated.

I don’t check in much here any more. These kinds of questions will get quicker answers over at BlackjackTournaments.com.

I will assume that you were around $20K bank, down $9500 from the other 4 players around $30K. With only 4 hands to go, it’s not at all unreasonable to go all in here, especially if most of the other players have small to medium size bets working. If on the other hand, they ALL bet big, I would make at least one more small bet.

But in this situation, you are very likely to need to win a big bet soon to have a shot. If they are giving you an opportunity to make up a lot of ground even if everyone at the table gets paid, take it.