Who is the “GameMaster”?

The excellent 24-lesson Blackjack School hosted here at BlackjackInfo.com was created by a friend of mine named Bill Channels who writes as “The GameMaster”.  His website GameMasterOnline.com held a huge array of insightful articles about blackjack and other gambling games until it went dark in late 2014.

When I first met the GameMaster, I felt an immediate kinship.  We have a lot in common.  We are both experienced winning gamblers, and we both host gambling websites that date back to the very earliest days of the web.  His domain GameMasterOnline.com was registered in May of 1997 while my BlackjackInfo.com came along in January of 1998.  And actually, these were not our first sites.  He originally worked with “Rolling Good Times Online”, dating back to 1996, and my site started at an address provided by my ISP around the same time.  In those days, the best search engine was AltaVista and nobody had heard of Google yet!

Bill is a true bon vivant.  In his own words:

Enjoy life! But do it in moderation. Don’t give too big an edge to the casinos when you gamble, and when you drink, drink the good stuff. Eat a small steak and finish your dinner with a fine port or brandy and a damn good cigar.  Getting the best out of life has little to do with money and everything to do with taste.The GameMaster

For a while, he was the exclusive US importer for a Polish triple-distilled rye vodka.  His knowledge of spirits and wines is amazing, and dinner with him is always quite an adventure.  He has been a successful gambler for many years, making money at a variety of casino games.  From time to time he was involved with blackjack mentoring and teaching, and it is from his experience working with students that he created his blackjack school.

The GameMaster made his 24-lesson blackjack school available for publishing at any gambling website that met his editorial requirements, in exchange for links to his DVD of the course materials.  And so it was that I began to host the school here at BlackjackInfo.  The series was so popular with my visitors that I later paid to have the lessons translated into French and Italian. 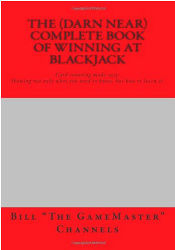 In 2012, Bill pulled together his thoughts on blackjack, and published a book:
The (Darn Near) Complete Book of Winning at Blackjack
(The link is directly to his book at Amazon.)

Putting his real name on the cover of his book was the first time that he publicly revealed the identity behind the GameMaster. He was nervous about it, and worried that it might cost him casino playing time. But the last time we spoke about it he was still as successful as ever at the tables.

Unfortunately, as I’m writing this in late 2014, I have been unable to contact Bill for a number of months. His website has been neglected, and in September it stopped responding altogether. My efforts to contact him by email have failed; an old phone number is no longer valid; and I got no reply when I mailed a letter to an address that I had. He has had several serious health issues over the last few years, and he posted on Facebook in December 2013 that he had moved into a rest home due to his physical condition.

For now, all of the links from this site that previously led to GameMasterOnline now direct to this page instead.

I’m sure that when I do hear from Bill, he’ll smile and tell us to carry on, enjoy life, and go win a little money.

I bid him and his family the best. In just a few weeks he (and you by extension and also direct insights as well, carrying on his information to late-comers like myself) brought me from thinking “This seems statistically calculable” (as well as ouch, my spending money!) to “Should I stop at double stake tonight or not”

Thank you Bill, and thank you Ken.

In the same game, let’s say the casino is dealing deeply and you have only half a deck left because the dealer has used 1.5 decks already. Now the same running count of +3 becomes +3/0.5 = +6. A true count of +6.