Your bet is not lost until the dealer picks it up. If the dealer errs in your favor, keep the money. Never cheat, but never give money to the dealer.

Of course, if the dealer makes an error in the casino’s favor, speak up and get it corrected. Look for gifts. The dealer is not supposed to show you either the card on the bottom of the pack or the burned card (i.e. the card turned under).

Enough dealers are careless, however, to make it worthwhile to look at the pack after it is cut. Seldom will you see both the bottom card and the burned card, but you will occasionally see one or the other. Whatever you see, you count.

When you are playing more than one hand and the dealer shows any card except an ace, you must finish playing your first hand before looking at your second hand. When the dealer shows an ace you may look at all of your hands before deciding whether or not to buy insurance. Look at and count all of the cards allowed. 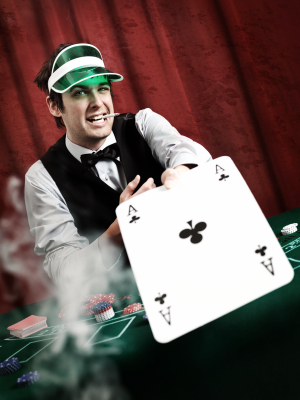 Break-in dealers often reveal the burn card or the bottom card. It is not unusual to find one who will reveal both. Occasionally one will reveal the hole card to first base when checking for a natural. Sometimes you can see the top card before it is dealt. If you can consistently see the hole card or the next card to be dealt to you, it is hard to lose. If I could do this every day I would not bother to count.

The psychology of most break-ins is not hard to understand once you have known a few. Many of them get canned on their first job and have to start over. Almost all of them are apprehensive at first. The schools usually send them out before they are ready to deal. They go to the table nervous and tense, and the pit boss usually aggravates this condition by jumping on them for making mistakes.

There are a few floormen who are understanding and patient, but this is not the general rule. The basic psychology is this: The average breakin has two goals.

First of all, he wants to deal properly without mistakes; he is on stage, and he knows it. During the first week or two he gets more heat than a card counter.

Second, he wants to win; almost all of them feel that winning will get them approval and thus job security.

Oddly enough, this is sometimes true. Many dealers have been fired for being unlucky. There is always another reason on the termination slip, of course; but the truth is that many pit bosses are superstitious.

Outside of sometimes catching hole cards and top cards, the third big gain from playing against break-ins is that they usually make the best tells. (Of course this helps you only if you are playing in a casino where the dealers check hole cards under 10s.) 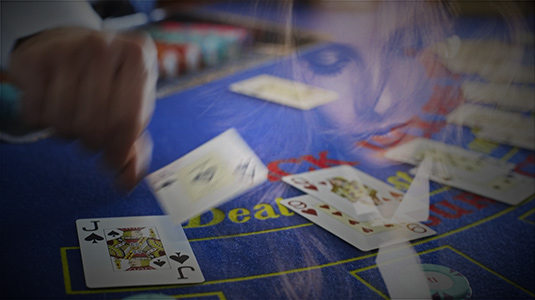 I once found a dealer who looked like he would vomit when he was stiff. I have seen several female dealers break down and cry in the back room when they lost.

Spotting these symptoms is often an art. Most break-ins try hard to look cool and indifferent or tough. It is mostly show. Beneath the facade, the emotions are seething. Sometimes there is no facade — just raw human feelings.

The fourth gain from playing break-ins is due to the fact that they know a little but not enough. This is quite often true of more experienced dealers also. They know that card counters exist and that the game can actually be beaten. Most of them have the crude knowledge that counters win by varying their bets or jumping in when the deck is hot. They rarely know anything about beating the game. (I know a few experienced dealers who are up on the game, and they are usually playing blackjack when they are not dealing.) Dealers are generally taught to shuffle when players up their bets or jump in in the middle of the deck.

Thorp was the first to develop a ploy for dealing with this kind of dealer — see the next section. There are other advantages of playing break-ins, but these are probably the most important — in general. They also make more incorrect payoffs.

In general, they make better targets for warp players, front loaders, and spooks. They are the prime targets of those who cheat. It takes a while for dealing to become natural, and during this period they are not very alert to players’ tricks in general.

The best way to find break-ins is to get a line on them through one of the dealing schools. A second good way is to know which casinos hire them and to be on the lookout. Many casinos hire break-ins because they like to teach their dealers themselves. Most of them break in on the graveyard shift. You will rarely find one at a major Las Vegas Strip. Occasionally someone’s nephew or the pit boss’s girl friend will get “juiced” in, but in general a year’s experience is required, often more. 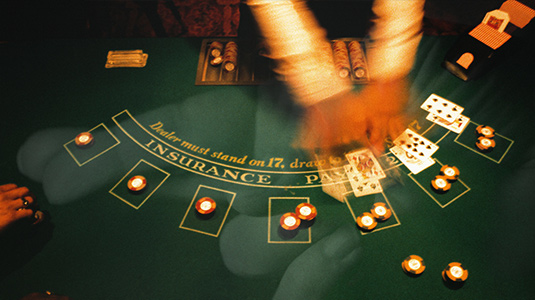 Novice dealers can usually be found at a new casino. This is not always the case, though, particularly at major new casinos on the Las Vegas Strip. These are coveted jobs due to status and better tokes. When a promising casino opens on the Strip, half the dealers downtown have their applications in. The time of year often makes a big difference. As the tourists come in and more tables are opened, you are likely to find break-ins anywhere. You are likely to find break-ins at any casino that does not do much business. The reason for this is tokes are not good at such a place, and the casino cannot be choosy. The more business the better the tokes, and experienced dealers gravitate toward places with bigger tokes.