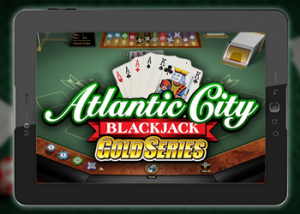 Microgaming followed up the successful Atlantic City Blackjack game with this sequel to the original. Choose whether to play a single hand or up to five hands versus the dealer at the same time. This game is an enhanced version of the original and an upgrade in terms of the quality of animations and sound effects.

Bets start at one dollar/euro/pound and you can play for up to 200 per hand. This type of bet range means that this game suits inexperienced players as well as those blackjack veterans who prefer to up the stakes a little. 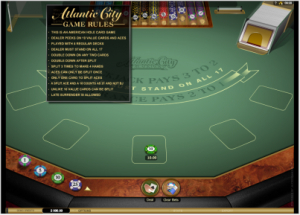 The dealer is required to stand on any hand with a value of 17 or higher. Blackjack pays out at 3 to 2, and there is the option to buy insurance against the dealer having blackjack if he is showing an Ace. Any cards of the same value can be split, and you can split as many as three times in the same game. Cards with a value of ten can be split regardless of whether they are identical, so a ten and a king could be split, for example. The number of times that splitting is available means that this game will suit aggressive players who are happy to take risks. However, it should be noted that Aces can only be split once. After the Aces are split the players receive just one more card and must then stand. The action buttons appear at the bottom of the screen, and give players the options to hit, stand, double, split (where appropriate) and to surrender. The auto re-bet function allows you to select the same bet as in the previous game, without having to individually choose bet amounts again. 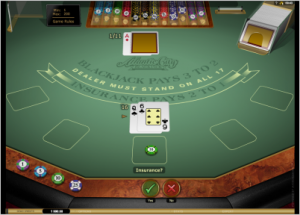 Atlantic City Gold Blackjack has a house edge of 0.38% once optimal strategy is utilized. This is about average for an online Microgaming blackjack game. A free version of this game is available above should you wish to practice before risking real money. The game is played with 8 decks of cards, and these are shuffled before each hand making it impossible to try to use a card-counting strategy when playing this game. The player has the option to surrender at any stage after receiving the first two cards. No side bets are available when playing Atlantic City Gold Blackjack.

Atlantic City Blackjack Gold from Microgaming is a decent upgrade to what was already a quality online blackjack game. The visuals are certainly superior in the Gold version of the Atlantic City game, with the cards being dealt fluidly with authentic sound effects. This game reproduces an elegant casino setting and the crisp graphics certainly complement gameplay. This game lives up the high standards which we have come to expect from all Microgaming blackjack titles. If you enjoyed playing the original Atlantic City game from Microgaming then you will certainly want to try out this updated version.