Double Attack Blackjack is a game that has been around for several years and has enjoyed placement in several casinos throughout Atlantic City throughout those years. This game more closely resembles standard Blackjack than some other variations, but at the same time, the rule changes in this game make it one of a kind. While it may have a greater House Edge than some other Blackjack games, the option to make a Raise bet (combined with the optimal times to do so) results in an element of risk that results in the game being more in line from an expected loss per amount bet standpoint with other good Blackjack games. 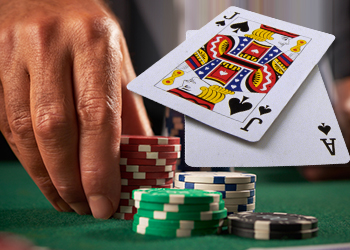 The first change is in the deck, in this game a Spanish deck is used, which is simply a deck without tens that is otherwise the same. In this game, the dealer stands on Soft-17 and there are other player-favorable rules, such as the ability to double after a split and the ability to resplit up to three or four hands…but the player may not resplit aces.

The player may also double or surrender at will, even after splitting, which is mitigated by the fact that a winning Natural only pays even money to the player. Furthermore, split Aces may not be hit and only receive one card. Insurance is increased to paying 5:2, but even with that, taking Insurance is still a very wrong decision, unless one is counting cards and has a very good reason to do so.

The biggest rule change, and possibly the most fun, is the fact that the dealer’s upcard comes out first and the player then has the ability to immediately double his bet based on the dealer’s upcard. Fortunately, this does not prohibit the player from later doubling his total bet (original wager and raise) at a later time, so the player can get a significant amount, relative to the original bet, in action against a weak dealer if the player gets a strong hand. In this game, the player will immediately double his bet on all dealer upcards of 2-8, otherwise, the player will keep his wager the same. In effect, this shall cause a player playing optimally to double more than half of the time.

Double Attack Blackjack is definitely a unique Blackjack variation, and is certainly one that we would suggest giving a try if you play Blackjack for fun.