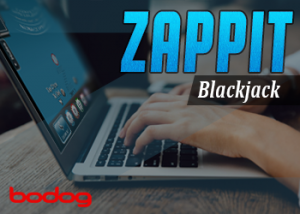 For those of you out there who follow Blackjack variants, the name of Geoff Hall might ring somewhat familiar. Geoff Hall is an excellent and well-known Table Games inventor who works primarily with coming up with variations to the game of Blackjack. His most well-known game and those of you who are familiar with him have probably heard of, is Blackjack Switch, a game in which a player is dealt two hands and may swap a card from one hand to the other hand.

While the game simply known as, ‘Switch,’ for short is Geoff hall’s claim to fame, he also managed to invent another unique and compelling Blackjack game invoking his trademark, ‘Push on a Dealer 22 Rule.’ Much as with Blackjack Switch, Geoff Hall made it his mission to create an interesting blackjack game with a unique rule set, unique playing options and coming up with novel ways for the casino to make up its house edge to offset the player-favorable aspects of the game.

With that in mind, let’s take a look at the Rules of Zappit Blackjack, which is available at both Bodog and Bovada casinos: 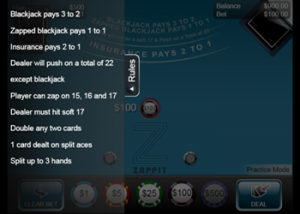 As was already mentioned, the main rule that benefits the dealer is the, ‘Push on Dealer 22,’ mechanism by which any bets left standing push instead of win on a dealer bust totaling twenty-two. With exception to that rule, the game plays fairly similarly to the standard game of blackjack with minor customizations to the rules available to suit the needs and house edge desires of the operator.

The rule that most benefits the player is the fact that the player may, ‘Zap,’ any hand totaling from 15-17 (or 15-18 depending on the rules) and exchange it for two new cards. The difference between being able to, ‘Zap,’ a total of 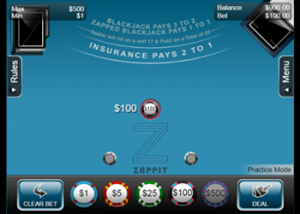 eighteen or not zap it is not that great, with respect to the house edge, because it is not a hand that a player would zap very often even if he/she were able to. The player would only, ‘Zap,’ a total of eighteen against a nine, ten or Ace, and if not allowed, the player would generally stand (but would split nines).

The player is not permitted to Zap a hand that the player received after zapping, nor may the player zap a hand after splitting. 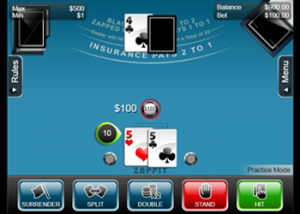 With respect to the Bovada game, the following specific rules are used which result in a house edge of 1.15%:

The ultimate result is a house edge of 1.15% with perfect strategy which, of course, would be worse than Bovada’s other Blackjack offerings.

While I greatly admire Geoff Hall and think that both this and Blackjack Switch are incredibly innovative and novel games, my overall opinion of this game is not positive due to the house edge being in excess of one percent, which is awful for a Blackjack variant. In fact, casinos powered by Playtech software often offer the superior Blackjack Switch, and while that game is much more difficult to play optimally, the house edge is an incredibly low 0.14%, which makes that game created by Geoff Hall Playtech’s best offering!

Granted, hand totals of fifteen and sixteen are universally reviled by players, and even seventeen, which is considered a somewhat tolerable hand, should always be zapped. However, the ability to exchange those hands for new ones is the game’s only hook and there is obviously no guarantee that the new hand is going to be much better. In my opinion, it is simply not worth eating so much extra house edge to get out of having to play an inferior hand every now and then. Granted, the ability to Zap such hands increases the win rate of the game, but playing the game long enough will decrease the money in your wallet faster than a standard blackjack game will, regardless of how skillfully you play Zappit.

Software Providers that have Zappit Blackjack