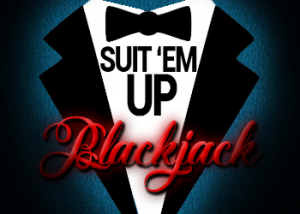 Suit ‘Em Up Blackjack is not so much a Blackjack Variant as it is a side bet for the game of Blackjack that is currently offered by online casinos using Felt Gaming software as well as perhaps some other online casinos. In terms of concept, this side bet almost functions as a stud poker game in that all there really is to do is place your bet and see what two cards come out.

Whoever holds the intellectual property to this side bet should get together with whoever has the equivalent to, ‘Perfect Pairs,’ so casinos can offer a table with both of these abysmal side bets and claim to give the player, ‘More ways to win!’ The general concept of both side bets is the same, with Perfect Pairs, any two cards of the same rank win, whereas, with Suit ‘Em Up, any two suited cards will result in some kind of winner with Suited Aces being the top pay. 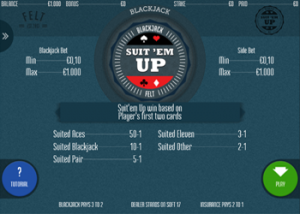 At one time, this game was available at the Red Rock Casino and may still be there. Interestingly enough, the game paid better at the Red Rock Casino because the top pay of a suited pair (60:1) is greater than the 50:1 offered by Felt Gaming. With only that exception, the two paytables are the same. However, the Felt Gaming version uses six decks as opposed to two which more than makes up for the difference between the two top pays. 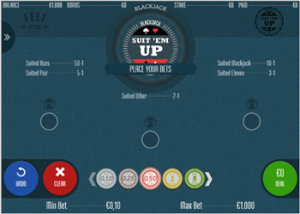 The rules of this game are simple:

The player is dealt two cards.
If they are suited, the player wins.
Pays increase based on the ranks of the two cards.

The only difference in the way this game is played is in the number of decks used as well as the pay structure. As mentioned, Red Rock offered a slightly better paytable than Felt Gaming given the increased payout for the top result of Suited Aces. Aside from that, the pays are as follows: 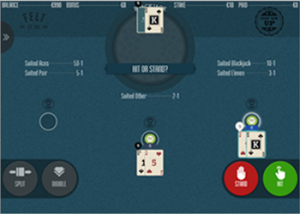 The house edge is lower on versions of this game with more decks as opposed to fewer decks (as the standard game would be) because of the effect-of-removal. For a quick example, let’s look at the top pay for suited Aces, in a two-deck shoe, there are 104 cards of eight are Aces and, if the player receives an Ace, only one card remaining can be the suited Ace, thus: 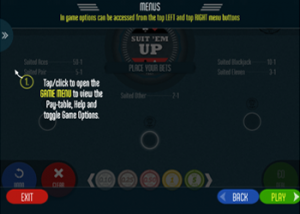 Thus, that is the return for the top pay on two decks.

Thus, that is the return on the top pay for six decks, with all pairs suited affected similarly. 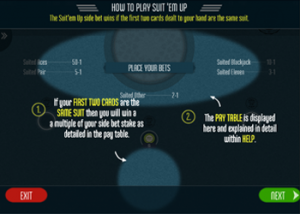 While this is ultimately just another garbage Blackjack side bet, I will maintain that it is better than Perfect Pairs for a number of reasons:

That does nothing to take away from the fact that the side bet based on the 50:1 top payout for suited Aces as well as based on six decks remains 4.65%. That sort of House Edge is actually somewhat low for a Blackjack side bet (by brick-and-mortar standards) but there are online slot machine games where the player has it better than that. Further, if the 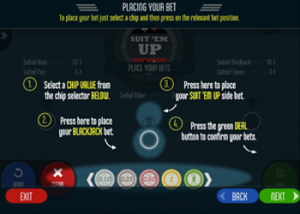 player wanted to buck a lower house edge with comparable payouts, then the player could take whatever amount he would have otherwise bet on Suit ‘Em Up and structure a single-number, split, street, way and column bet at single-zero Roulette.

I will grudgingly accept that this side bet is not so bad compared to other Blackjack side bets but would urge players to keep in mind that side bets are sucker bets and, ‘Not so bad for a side bet,’ is a very low standard.

Software Providers that have Suit ‘Em Up Blackjack